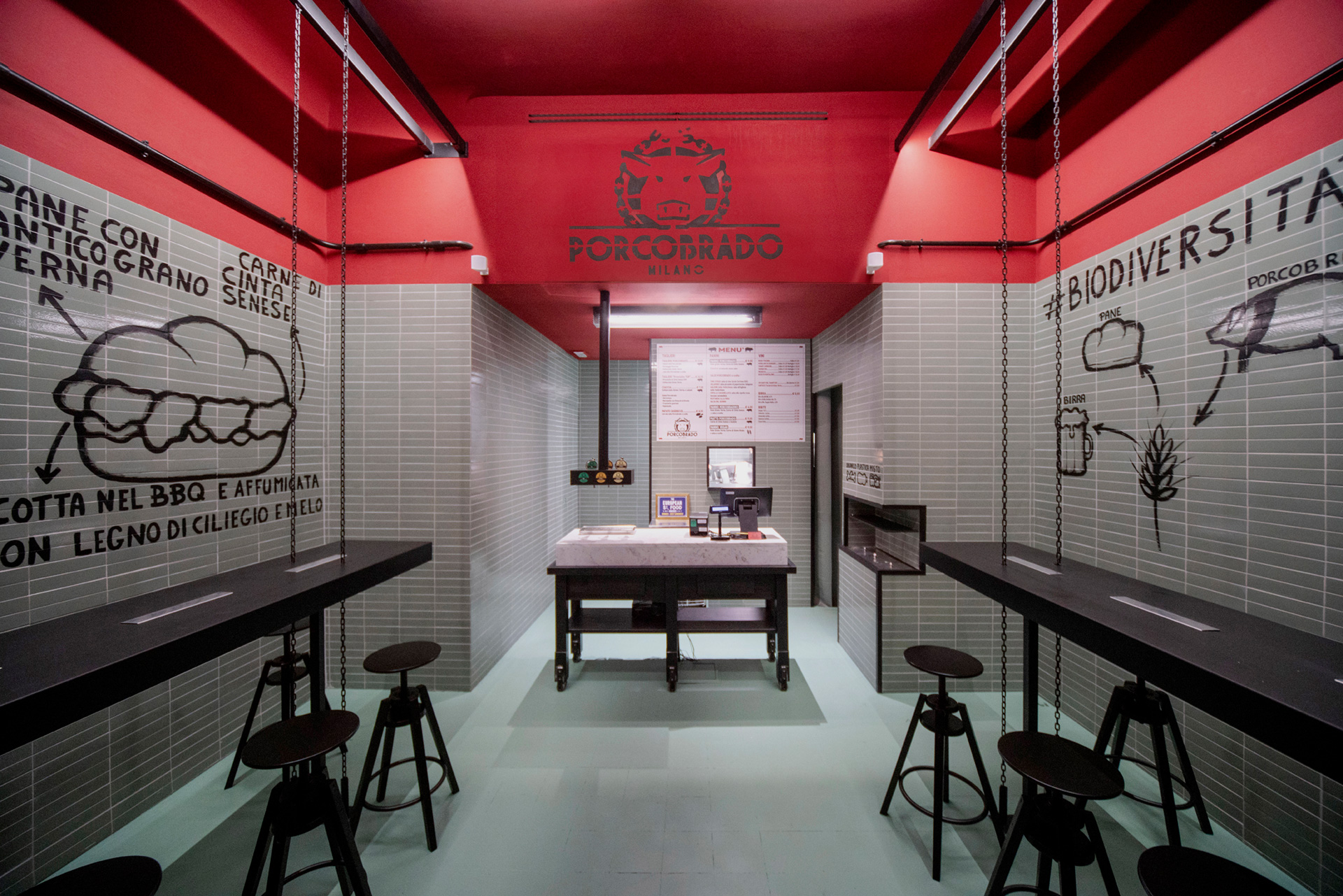 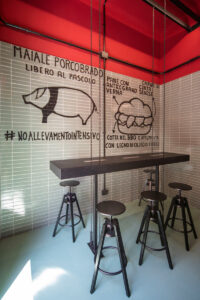 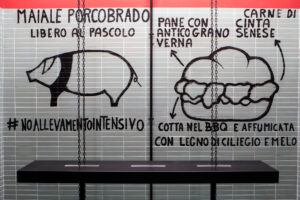 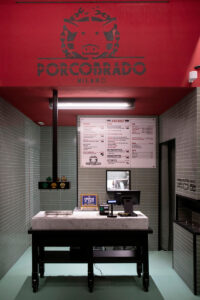 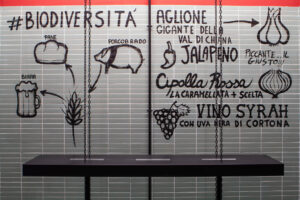 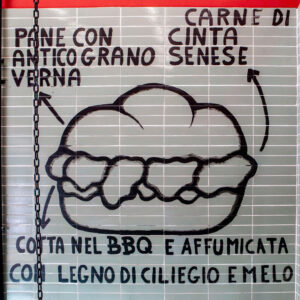 In 2018, the project for franchising Porcobrado restaurants started with a formula inspired by the proven model of street food and Angelo Polezzi, owner of the fosterage of ancient breeds that now counts more than 100 years of history, decided to involve the architect Emanuele Svetti to create the right image.

This is how the now famous sandwich made of Cinta Senese, that grows in the wild in Tuscany, arrived in Milan and is today located in the coolest district of the city, Isola, where in April 2018 the first Porcobrado store opened, with the same name.

The initial idea by Emanuele Svetti was to create a young and metropolitan environment, unique and unrepeatable – just like the sandwich, with the elements that recalled the concept of butchery, but also transferring a “piece of Tuscany” to the city.

The real difficulty was to introduce the “nomad” concept of the food truck in a stable place; where to stop, discover and savor a special sandwich in a festive and appetizing atmosphere that made the Tuscan experience live at 360 degrees.

The decision therefore, falls on adopting a strong image, where the colours of the Porcobrado logo – Green, Red and Black are emphasized creating a successful visual impact, with the aim to attract the passerby, then satisfy the palate once the sandwich is tasted.

Compared to the food truck, an obvious chromatic difference strikes the eyes; in fact if in the van the black and sage green colors of the logo prevail over the red it then becomes only a detail. In the new store this is the chromatic element that takes the stage, with the main purpose of giving character, as well as visibility to the place making it attractive already from the outside.

Inside, the space is contained: the walls are marked by the graffiti of a Milanese street artist, who tells the story of the breeding, for example – sandwich recipes with the sauces surrounding it and not forgetting the importance the new brand gives to the topic of biodiversity.

The Porcobrado furniture is informal and playful, characterized by two social tables with black stools that can host up to fifteen people. Designed by the studio, made by a craftsman, these are in sandblasted and charred larch, contained in a calamine-effect metal tray and supported by chains, which are both a decorative and structural element.

The inspiration for the Order Counter was taken from an old butcher’s counter owned by Angelo’s grandfather, dating from the early twentieth century, also in sandblasted larch with a marble top. The sand-green coloured walls are covered with klinker tiles, recalling a detail often used in the past in the Milanese metropolis.

After the Milan start-up space, The Porcobrado project is planning three new openings for the year 2020, with the imminent one opening in Northern Italy. 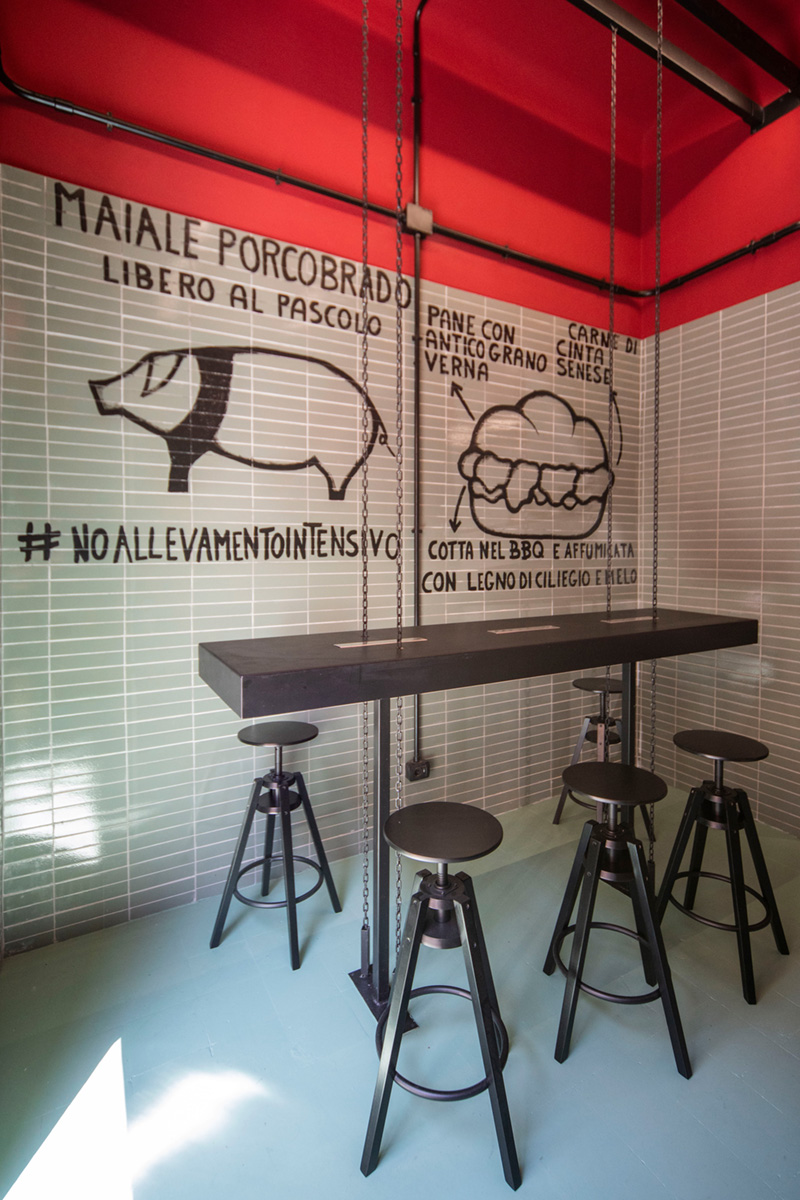 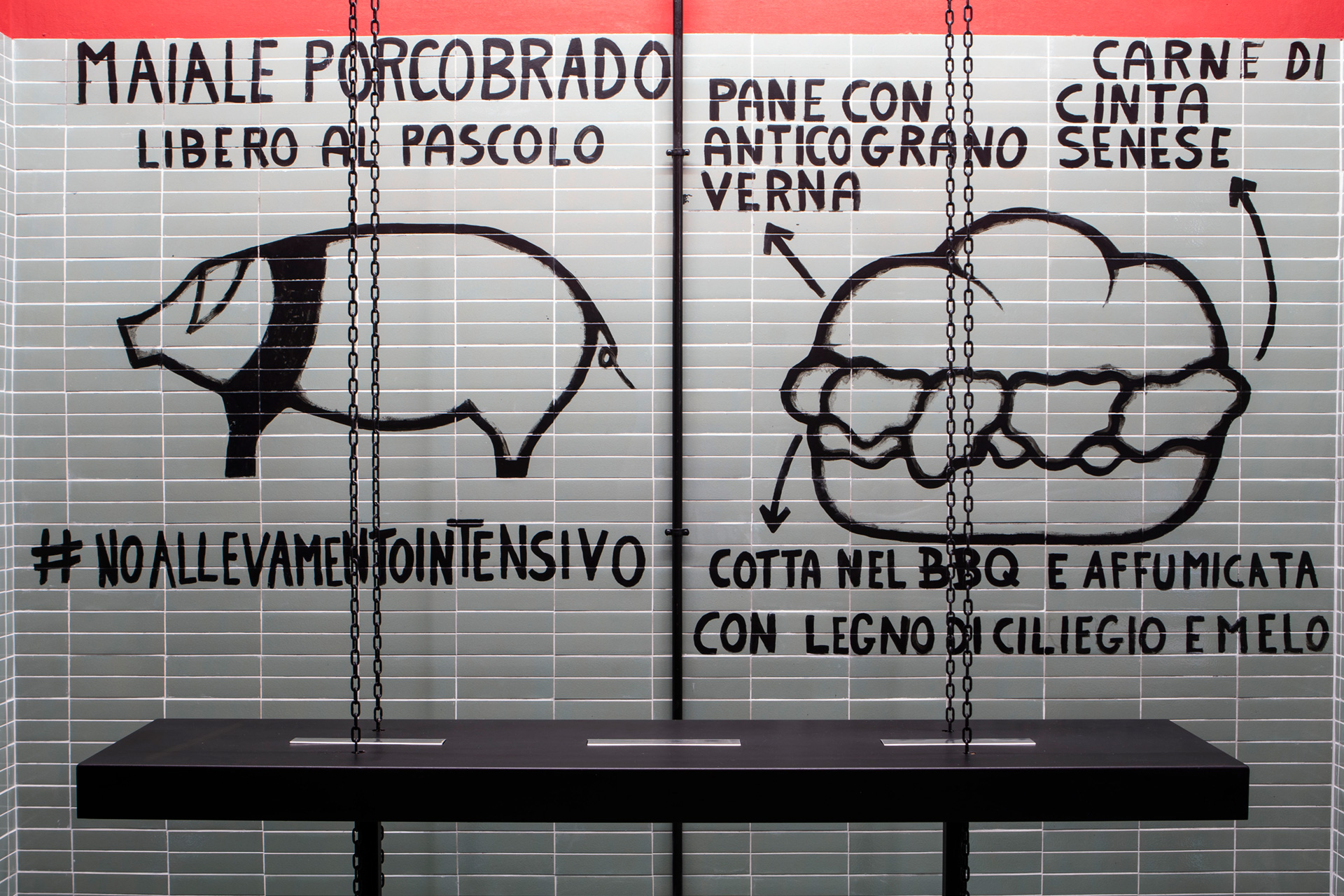 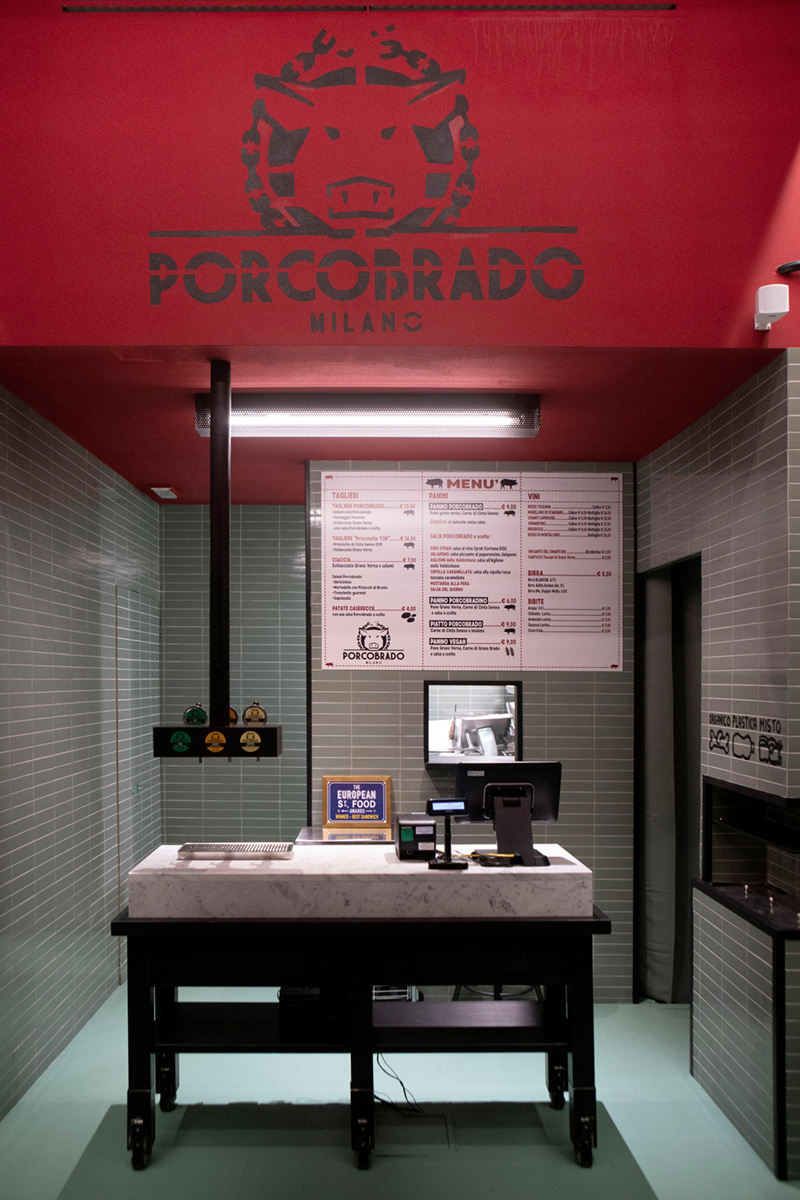 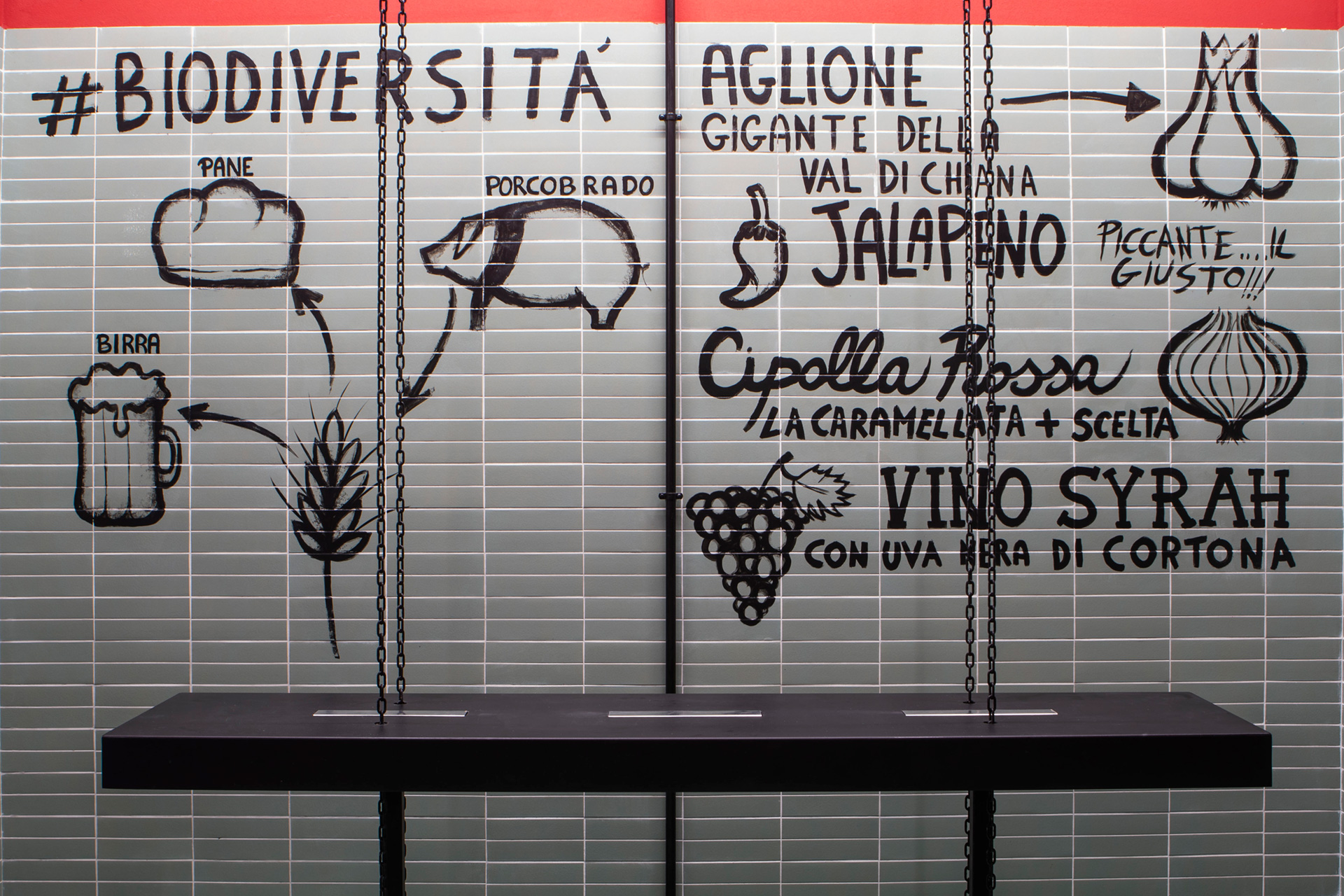 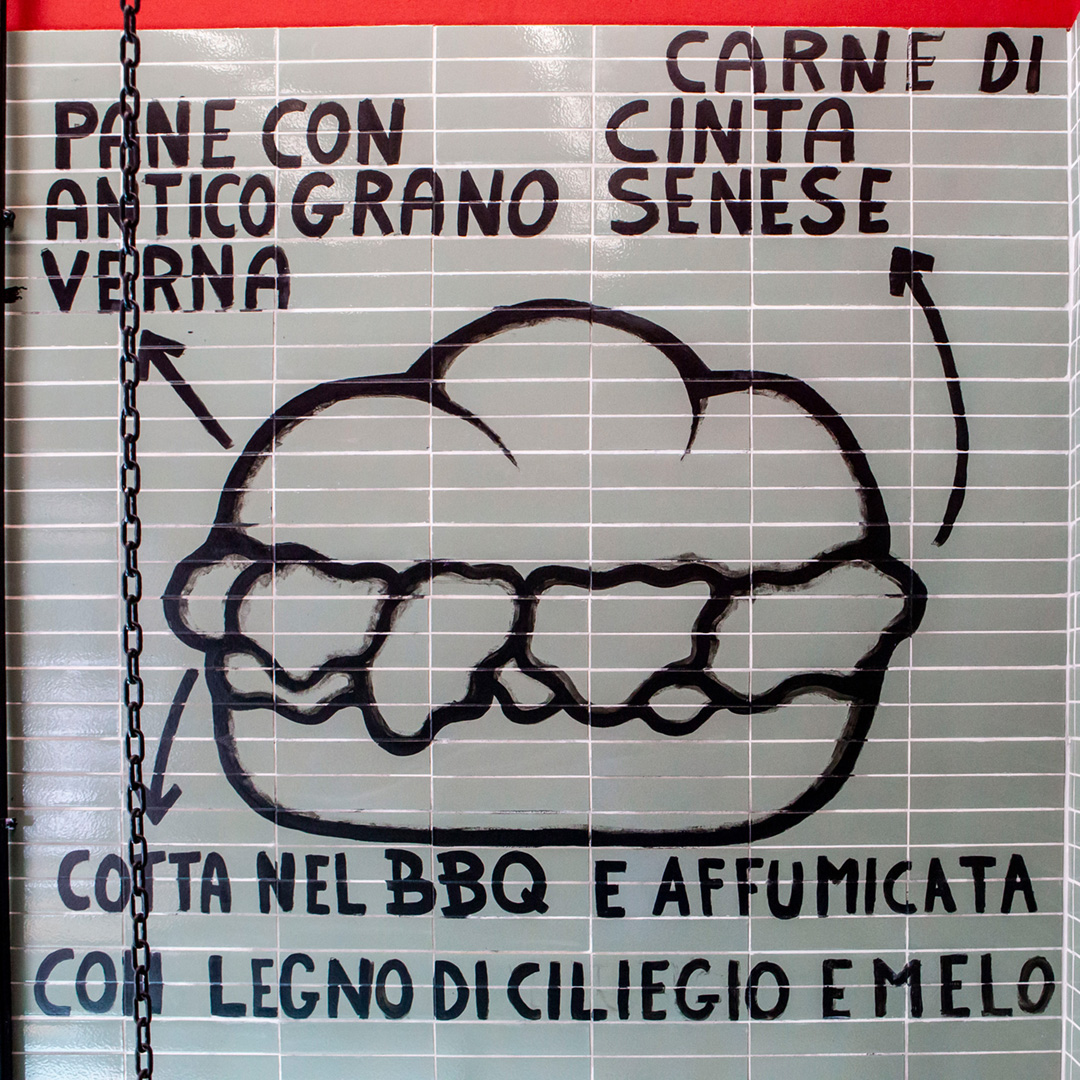