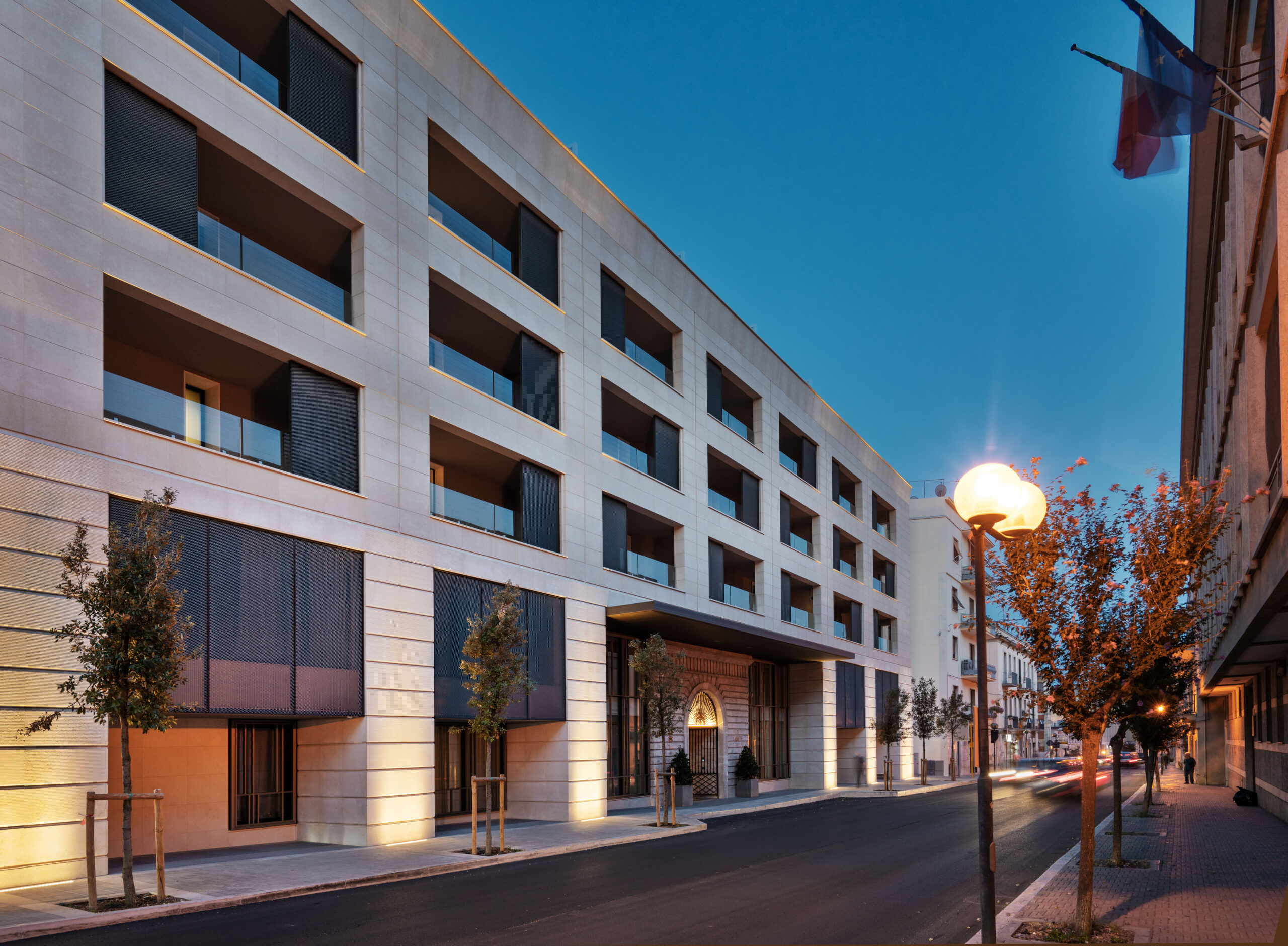 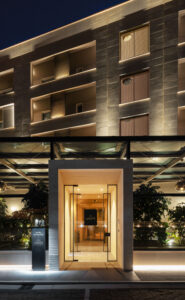 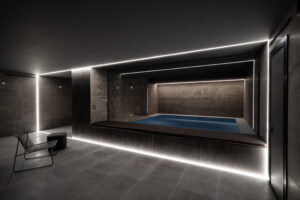 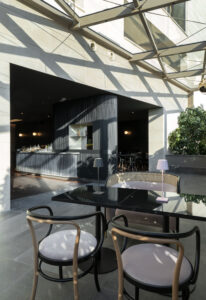 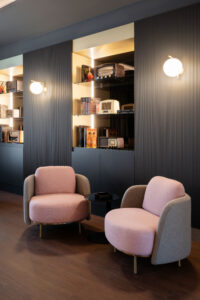 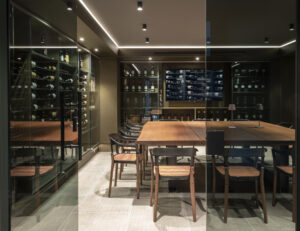 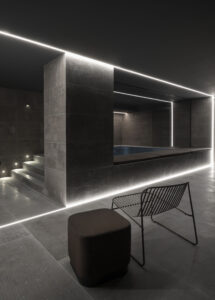 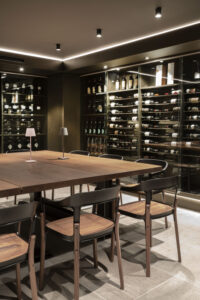 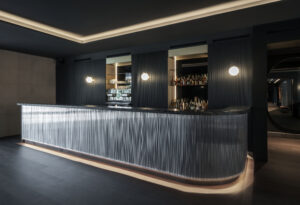 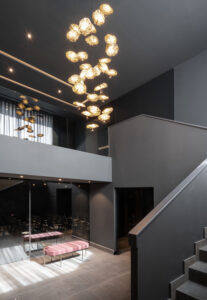 A versatile and transversal complex, capable of adapting to the incredible peculiarities that the 2019 European Capital of Culture has to offer. La Suite, a five-star hotel designed by Studio Marco Piva and inaugurated on 13 August to celebrate the prestigious award given to the wonderful city of Matera, is located along the famous Via Lucana and at a few meters from the Sassi, the area already known in the early Seventies as the vegetable garden of a noble building called “Giardino Porcari”.

Pure and elegant in form, with its essential fluid spaces and expression of functional architecture, La Suite Hotel presents itself as a triumphant building, whose design is intuitively inspired by the twentieth-century current of Italian rationalism, characterised by a lack of decorations to promote an authenticity that concretely integrates into the historical city.

The uniqueness of this five-star structure lies in the synaesthesia of aspects that pertain, on the one hand, to the social and urban fabric of the context, and on the other hand, to the analysis of contemporary stylistic trends, giving rise to a traditionally modern complex.

The Hotel is designed to offer an exclusive stay thanks to its formal fineness, the use of local materials and the renovation of an imposing arched portal of the 17th century, which characterises the entrance to the building with its strong presence. The symbolism of the arch, an archetypal element that reminds of the Tuff caves of the Civita, is just one of the many iconic elements that characterize this structure and create a line of continuity with the past.

The design specifically regards the entire complex, conceived and built as a new urban meeting point, generating wide spaces intended for the social life of the city without contaminating its historicity.

La Suite is located in a strategic area in the historical centre of Matera, with two impressive views: on the one hand, there are large windows overlooking one of the most important streets of the city, the famous Via Lucana; on the other hand, the view is on a courtyard space used for collective events for the inhabitants and visitors of the city. The linearity of the façade is intermediated by a charming Winter Garden, a real seamless extension that acts as a filter between the outside and the inside and that can be enjoyed every time of the year.

The architectural study of the façade is undoubtedly original, marked by the juxtaposition of vertically arranged, chromatically calm lighting elements, which define a new, visibly homogeneous space with warm colours, in contrast to the intense light the city reflects naturally. An overall view of the fragmented façade is also offered by the rhythmic position of the Mazzaro slabs; Mazzaro is a very resistant and performing type of Tuff, and it is also used as a traditional local covering material.

La Suite consists of 40 generously sized rooms of different surface areas, equipped with flexible spaces, customised furniture, including lamps at bed heads, and bathrooms, characterised by a homogeneous chromaticism that reminds of domesticity.

Geometries, volumes and materials, from the most technical ones in flooring, to structural laminates, to traditional stones, are expressed through fine workmanship and elegant details, creating a timeless style.

In the Interior Design project, the wide spaces are characterized by plays of perspective, iconic elements and by a scenic use of light. The atmosphere is made welcoming in all areas of the hotel, including common areas and rooms; it has been thought to provide visual relaxation for human eyes, used to the cold and artificial lights of the city.

The building comprises a basement and six floors above ground; on the ground floor there are the hall, the coffee bar and the breakfast room, which can be converted into an informal meeting space.

In the basement there are a meeting room, a SPA comprising a wellness centre and a fitness room, and finally a wine cellar, used for tastings of fine wines.

Finally, there is also the large lounge and the panoramic terraces that open onto the city, creating a versatile place, a new point of urban sociality and expression of modern human needs, marked by the desire to know the urban fabric in which they are found.

Indeed, tradition is reinterpreted from a contemporary perspective, as it must necessarily meet the new demands of the hospitality market in a world-unique city increasingly focused on quality tourism.

40 suites | 6 floors above ground and 3 underground 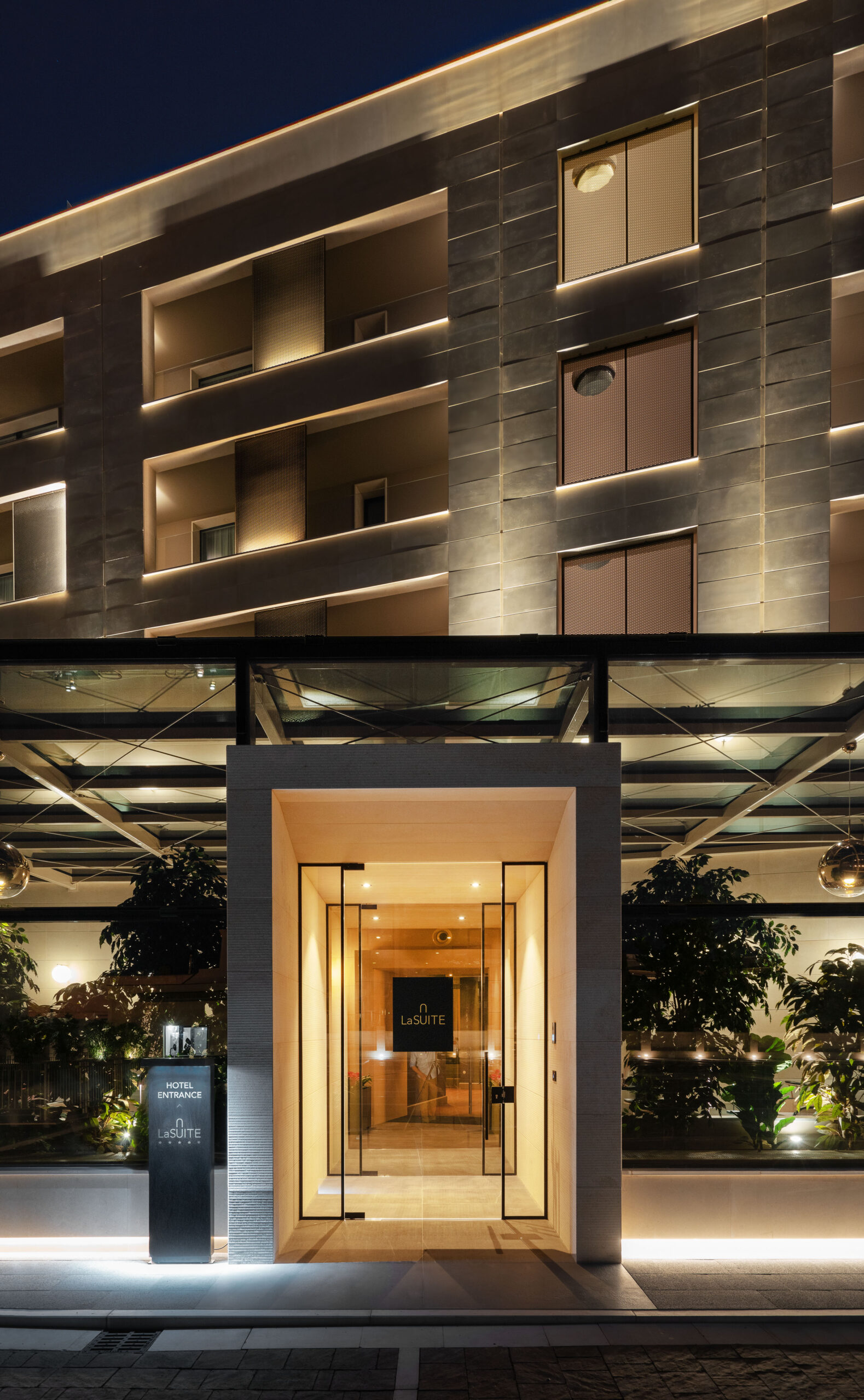 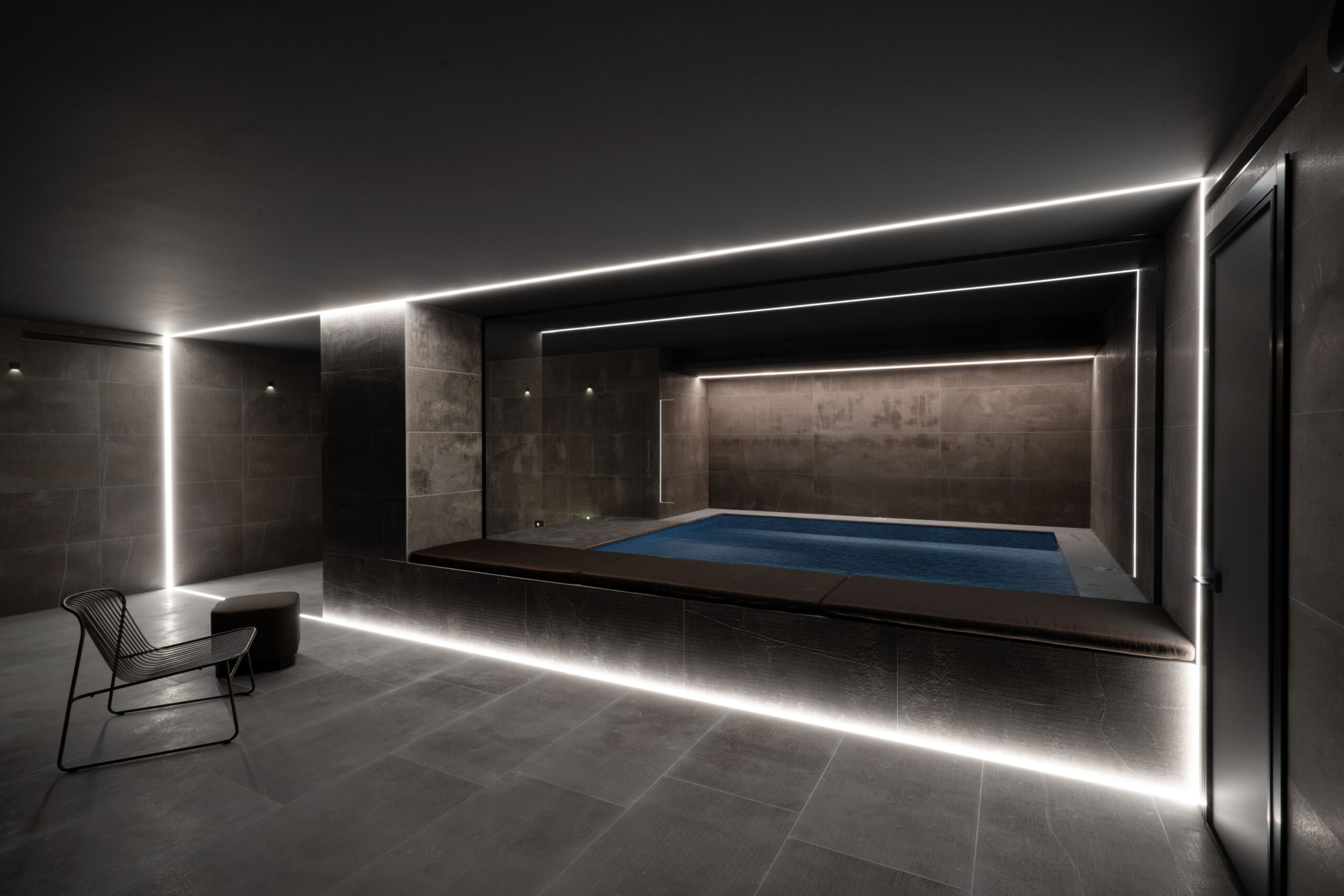 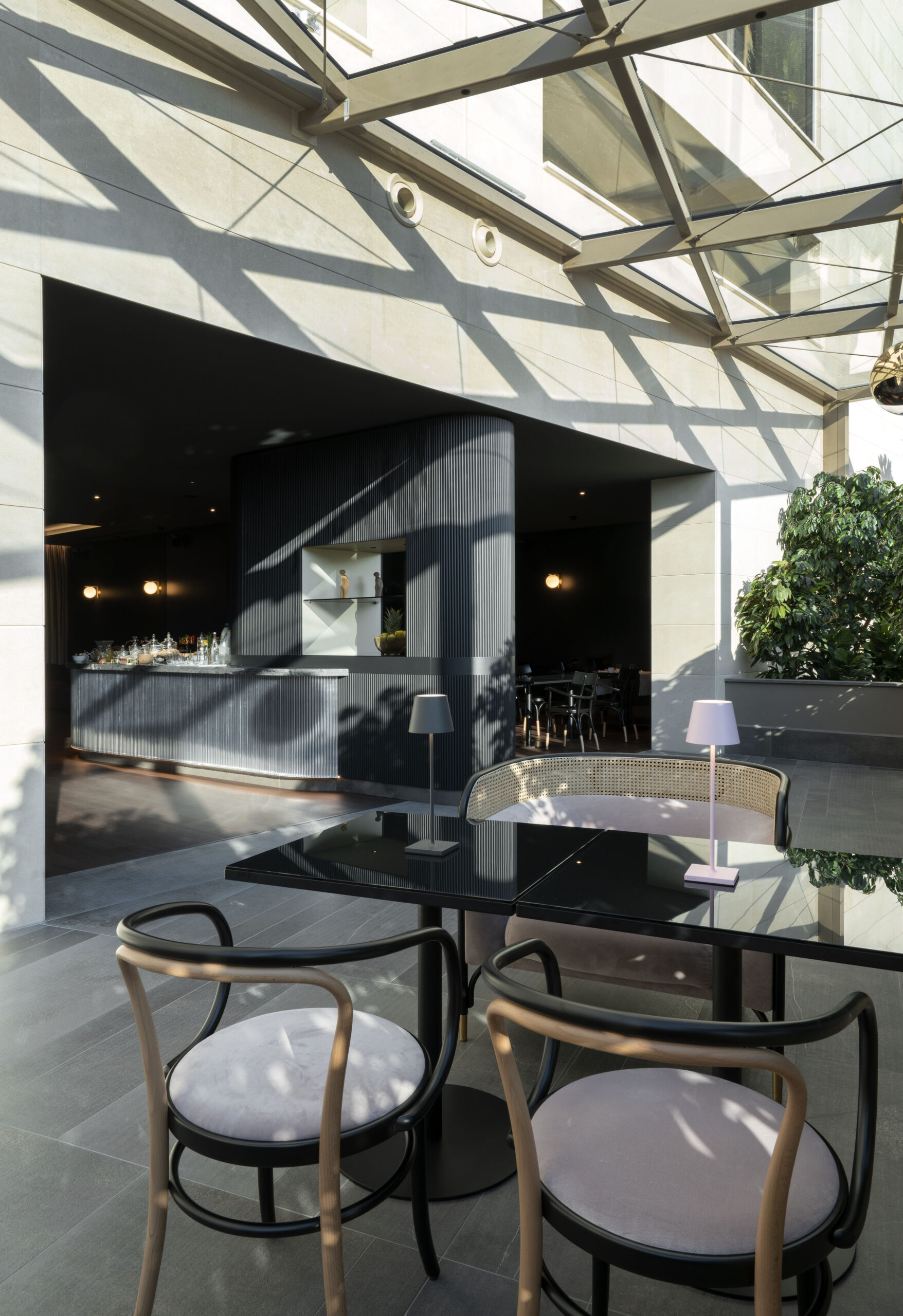 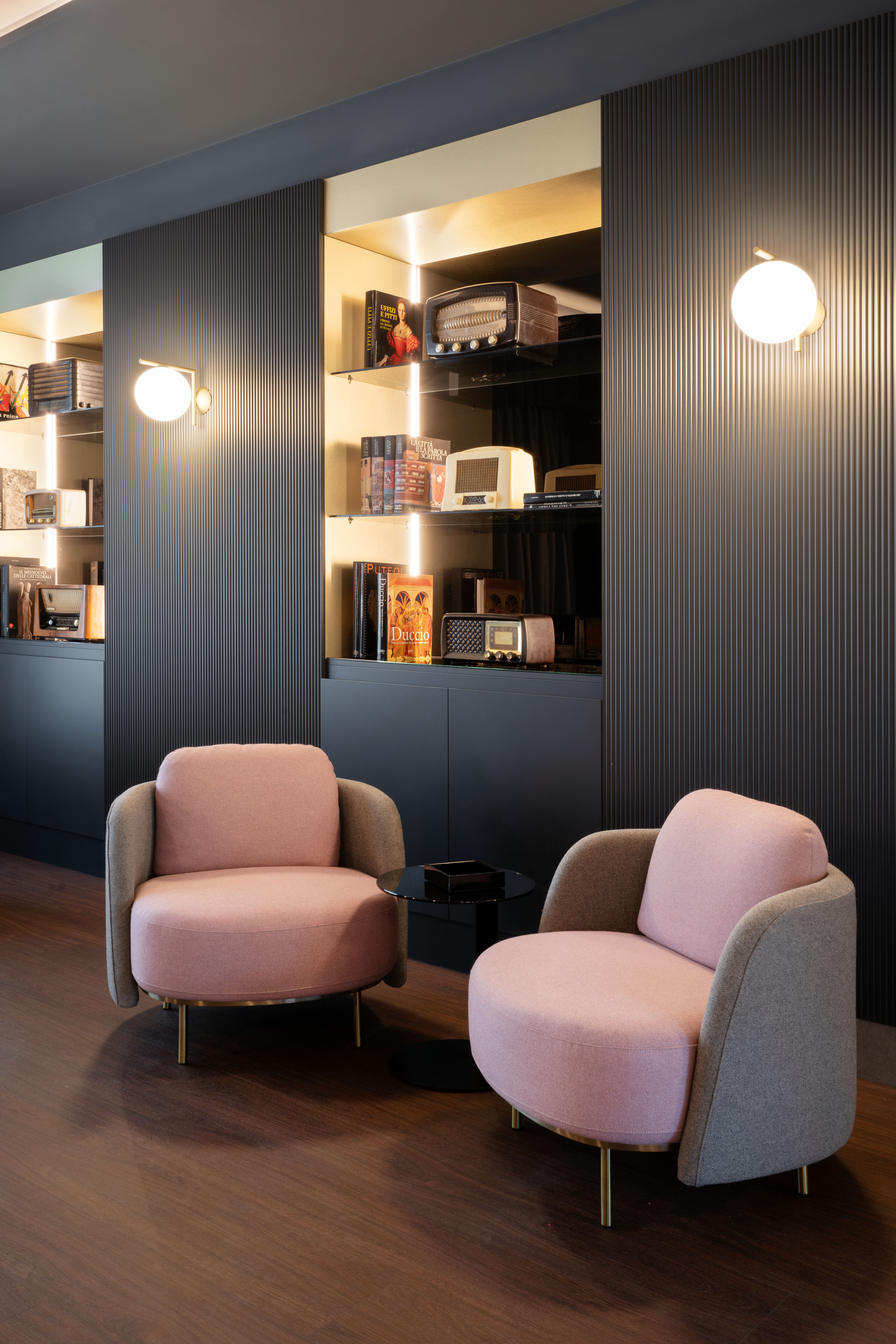 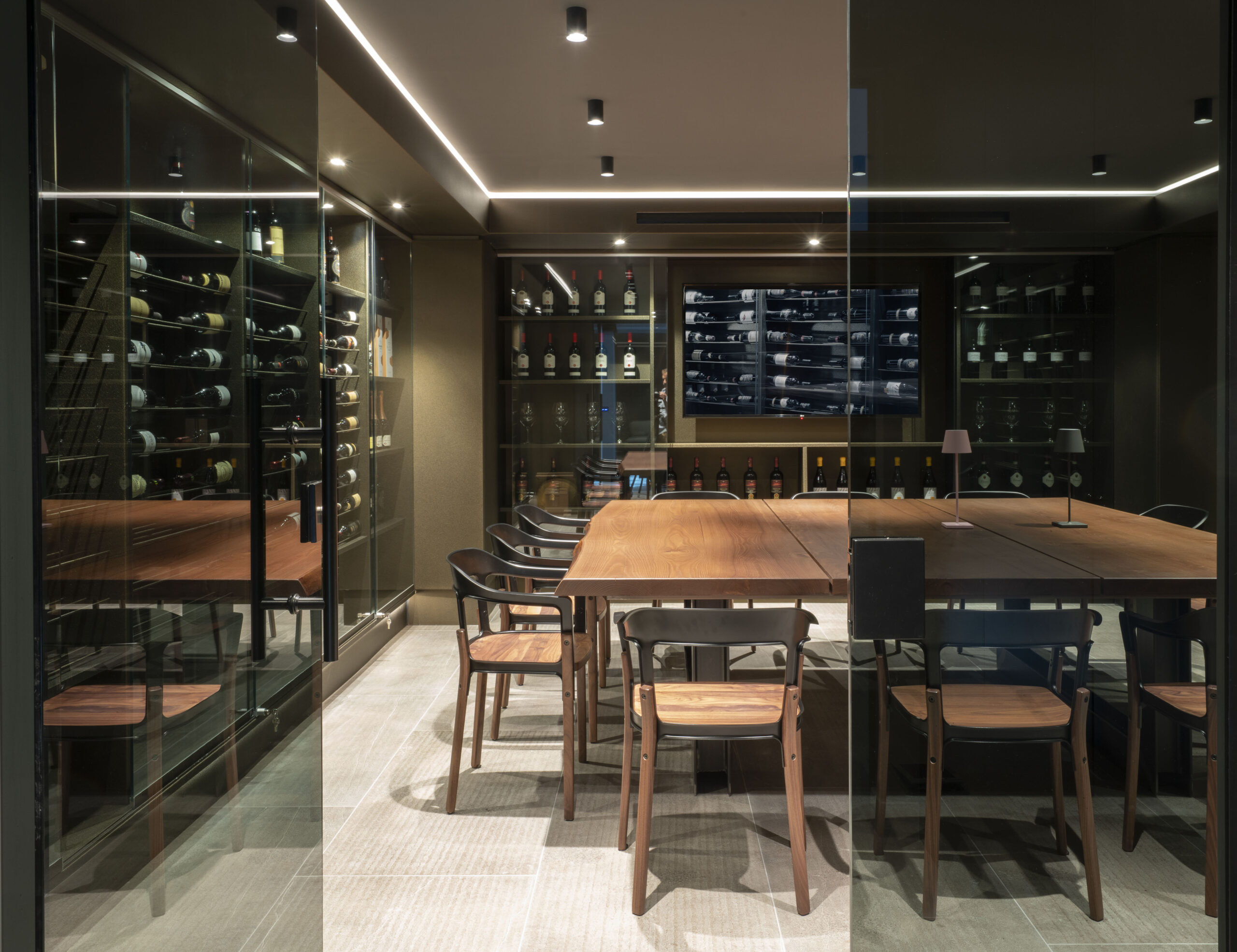 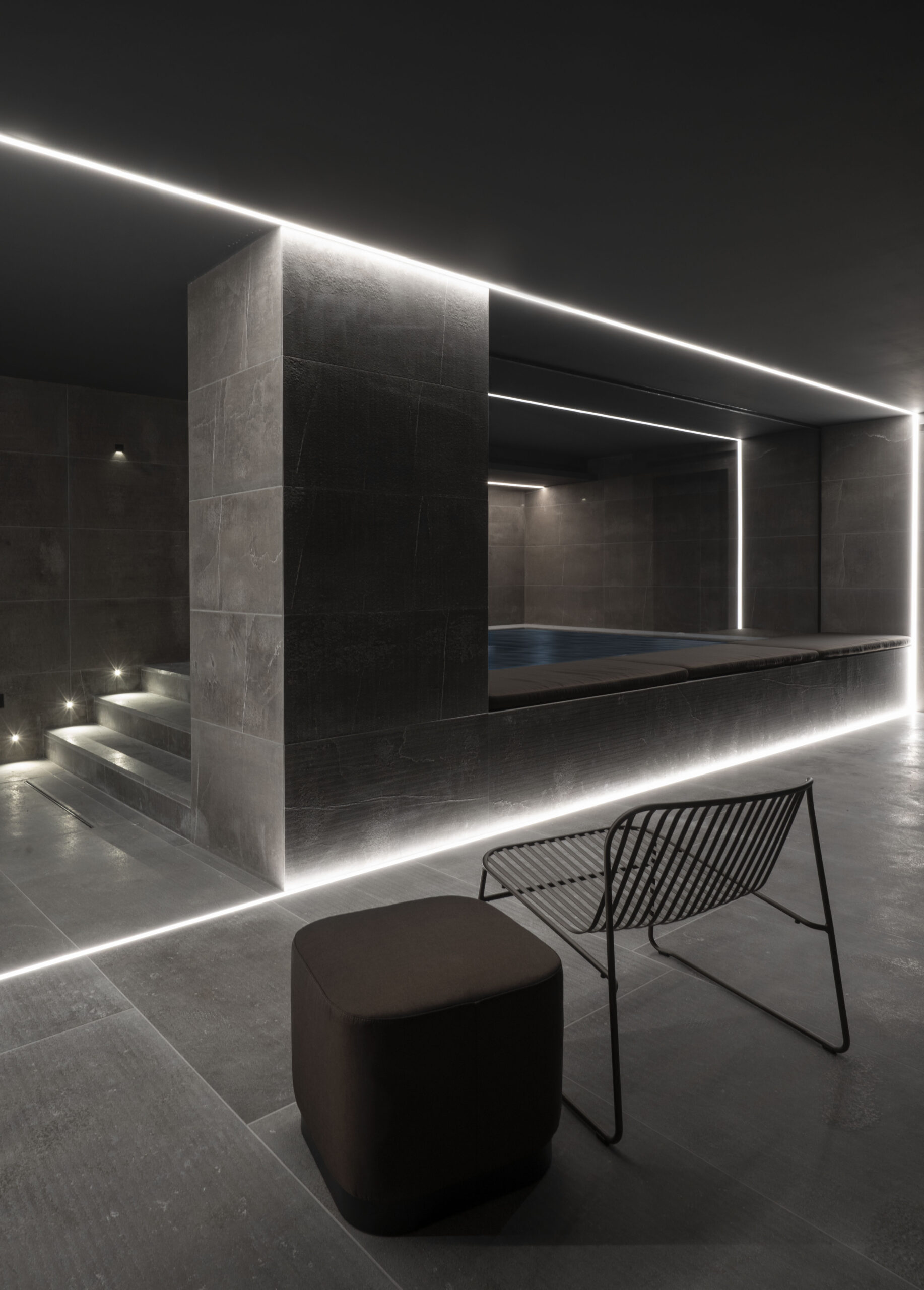 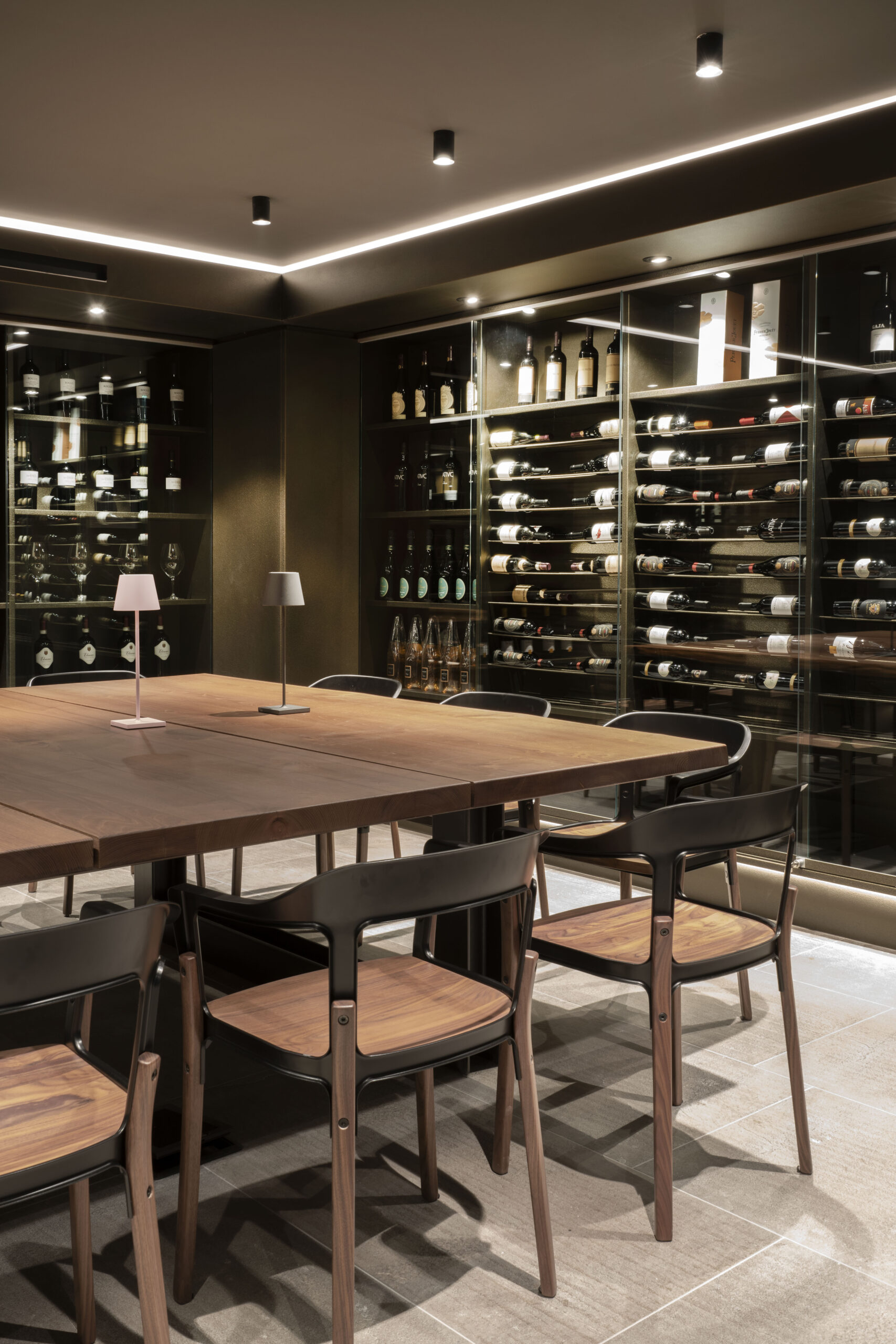 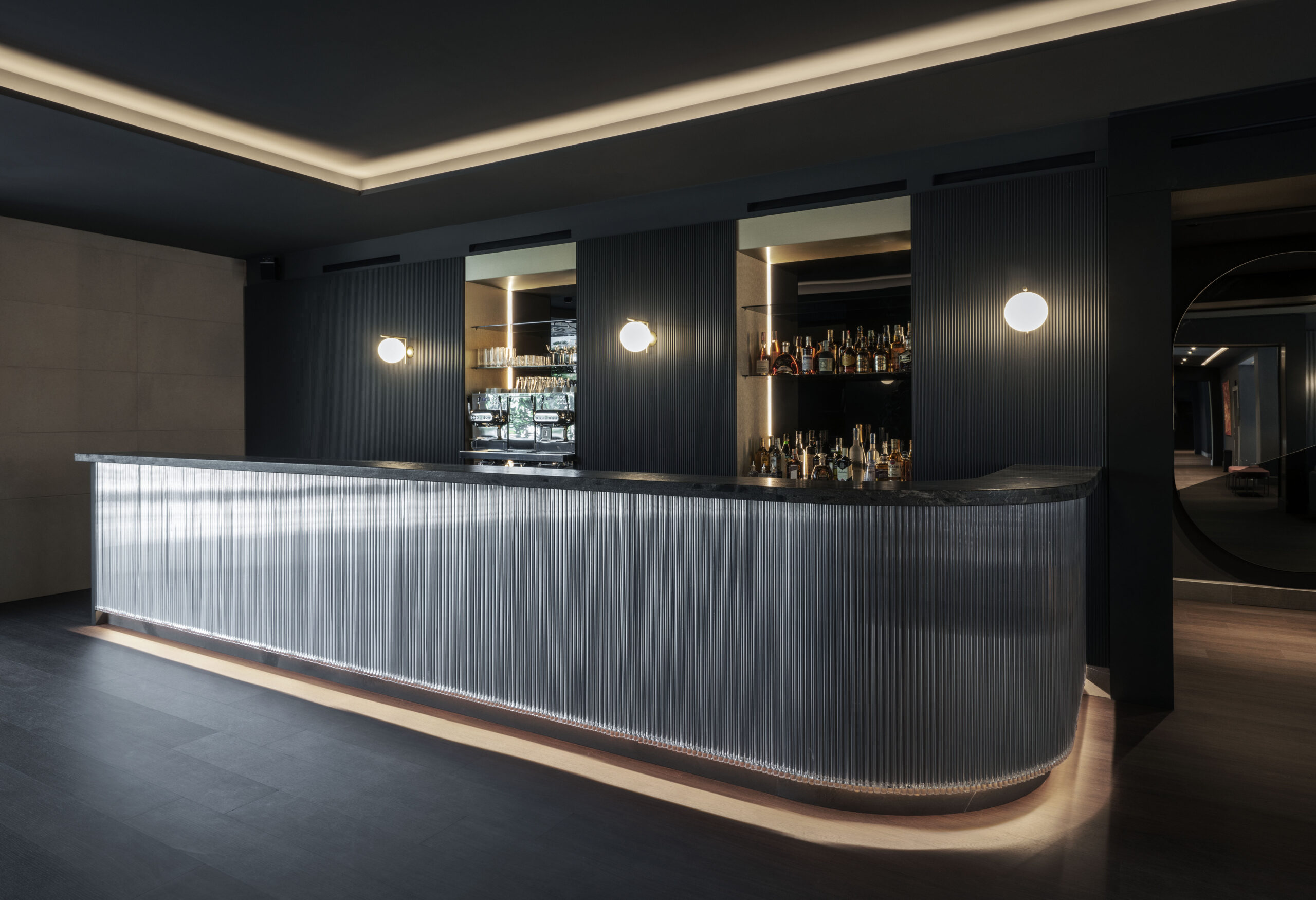 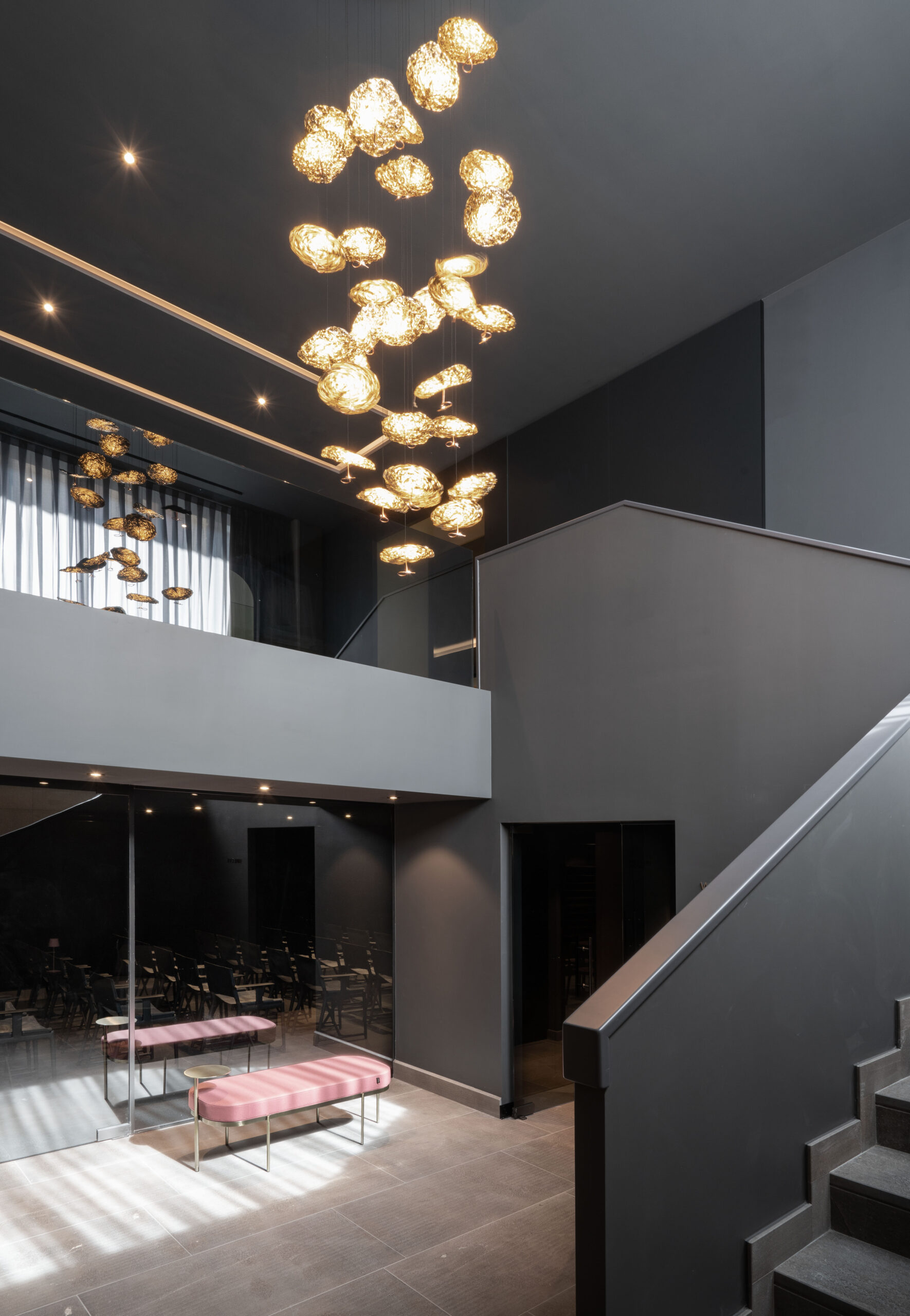