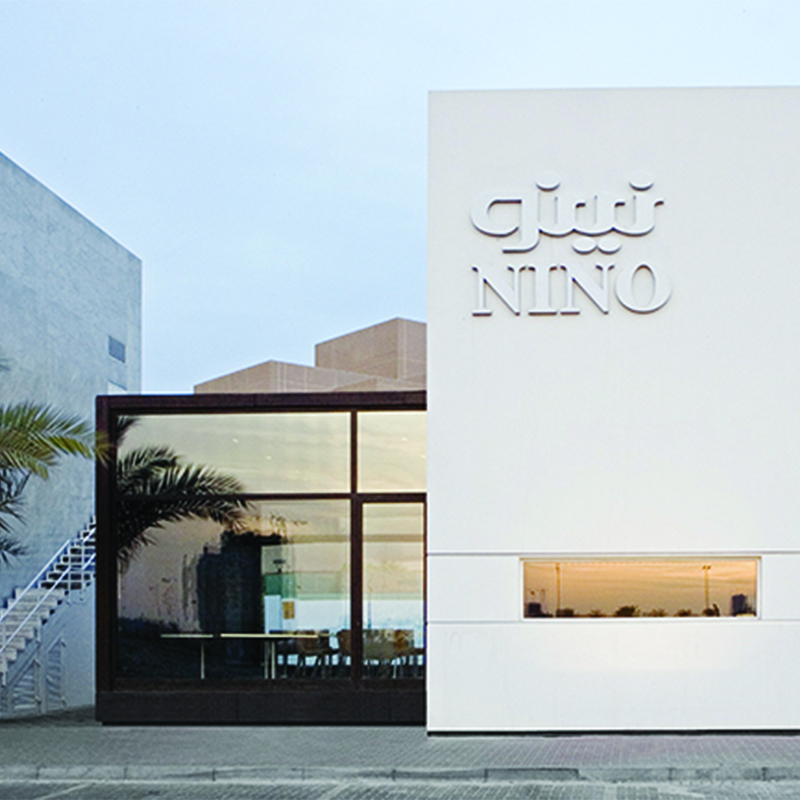 The construction of a new building intended to be the location for two restaurants in an area of recent urbanization in Manama City, the capital of Bahrain, offered an opportunity for careful consideration of the urban and cultural dynamics that have been characterizing the Persian Gulf countries. The plan, created on a local dealer’s demand, had as its main purpose the construction of the building as well as of the larger of the two restaurants following the concept developed on purpose for an Italian food restaurants chain that the local customer intended to introduce into the country for commercial expansion.

The construction site lies quite close a trade buildings area, between a city street  and the  internal parking lot, along the western edge of the coast heading towards Saudi Arabia.

The whole Gulf area is known for having been affected by extremely powerful transformation dynamics over the last few years which have deeply modified the economic and urban patterns of these countries; such cultural and social phenomena have been  quite remarkable and still make it difficult to fully appreciate the scope of the change processes that these countries have been undergoing. To Western eyes they convey the impression of a uniform, often indistinct geographic whole; on the contrary, the reality of each of them is definitely manifold and complex,  due to their having undertaken individual paths with the aim of fostering a transition of their economic systems from oil extraction and exploitation to the most diversified forms of commercial and financial service industry of the global era; many of them have become favourite destinations for leisure and free time, and fashionable seaside resorts, always swaying between excess and  stereotype. These are places where everything seems to go beyond the normal or accepted limits, where huge financial resources allow any kind of achievement or fulfilment, though there very often ensues a feeling of dizziness, a kind of confusion caused by either the absolute beauty of landscapes or their primitive fascination, the vast emptiness of desert spaces or urban growth that inexorably takes up still available spaces on a methodical, systematic basis following the laws of financial investment in real estate.

The land welcomes the visitor showing its broad, even flatness, which is however being replaced, in all their solipsistic height,  by the new buildings whose task is to continuously enlarge the boundaries of sprawling cities. The impression one gets is that buildings are often reduced to mere external wrappings, boxes intended to do nothing more than housing people and their activities, which only seem to be seeking for some sort of redemption, even of greater dignity, in the empty talk of contemporary international style and nevertheless look as if they were in continuous search of a form of dialogue with the rest of the city fabric. And yet such dialogue is suspended between seriousness and lightness, between the desirable chance of leaving a mark deep into the urban structure and the short-lived internal function of the place devoted to leisure and enjoyment.

The building is indeed no more than a housing box, where one of the typical activities that contribute to the economy of Bahrain is carried out – this country has indeed become over time a leisure resort for the Saudi neighbours that like spending the weekend there. Restaurants and shopping centres are the actual places that host public social life, especially the younger generations’: the local youth may unquestioningly accept the tradition of their fathers’ customs, but quite willingly seek for  convenience goods and attractive, exciting places which a certain international glamour inspired by a precise design makes even more desirable.

Thus, the plan for the building of the restaurant  becomes a real exercise in interpreting a particular “way of life”, which is described and illustrated in all its typical aspects by alternating irony and great attention to detail, whether its comes to the design of plates and dishes for the meals or to the internal materials and facing, but at the same time seriously attempts to show how artificial a certain rhetorical vernacular idea of the typical restaurants worldwide  may turn out to be. Outside the building is characterized by absolute simplicity;  the choice is for emphasis to fall on the horizontal dimension, on the evenness and sameness of surfaces, which come in white very much like the sandy surfaces of the places to be found all around. It is a closed parallelepipedon  with few openings interrupted only by full and empty projecting spaces made from corten steel that look like small oases set on even, undifferentiated surfaces. In some way the attempt has been made to create a renewed relationship between the new building and the landscape, one in which the building itself seems to merge or even nearly disappear into the background, to blend with the surroundings that often consist of conspicuous, somewhat ostentatious constructions, instead; here, conspicuousness or ostentatious display are only slightly indulged in when the various views of the building appear like some sort of surfaces made to preserve beautiful handwriting, the reminiscence or recollection of a place where writing has always been conceived of as embellishment.