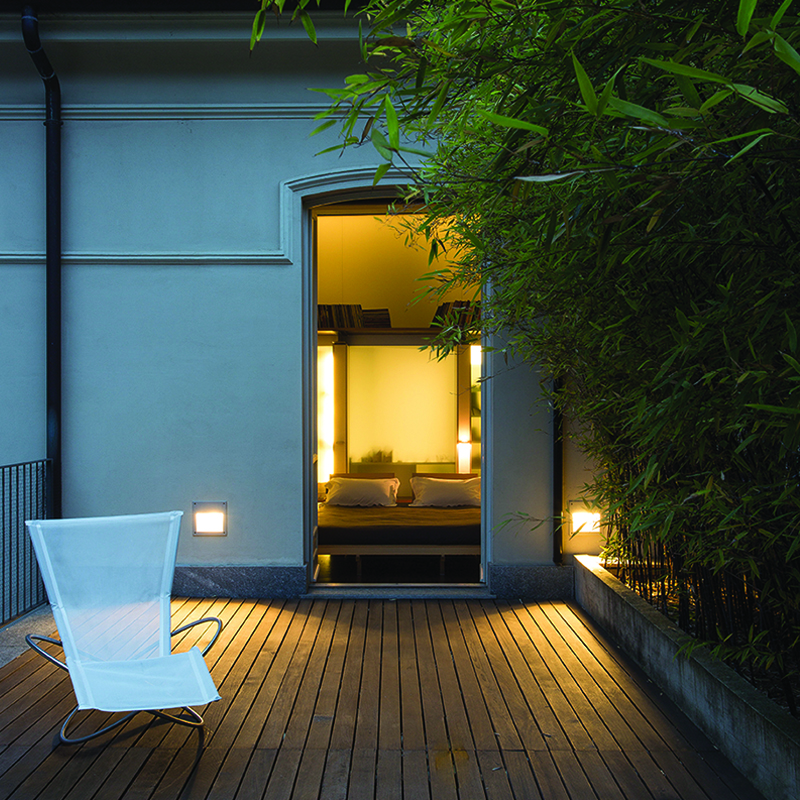 Restoration work on early 19th century industrial building originally used as a main warehouse. The loft space covers an area of  460 sqm with an additional 370 sqm terrace. The existing structure is made from stone and brickwork (19th century portion) and reinforced concrete (20th century portion). Slabs Unplastered reinforced concrete. Internal partitions from brickwork and grey glass laminated with white film. Fixed fastenings and doors are made of birch plywood, laminated with anodized aluminum.

White lacquered MDF was used for additional sliding doors and the kitchen, both designed to measure. A metal framework mezzanine comes with untreated phenolic birch plywood flooring. The floor in the living area is made of wax-finish cement, while  industrial Wengé and marble floorboards were selected for the bedroom area. The outer floor and coating  surfaces are made from untreated Ipé-wood staves fitted on a stainless steel framework. External walls and flower boxes come in untiled reinforced concrete.

The guiding aim was to obtain a dwelling place for a young couple with 3 children sharing the sociocultural dynamics of the contemporary underground music world, at the same time also leading an active life in international avant-garde fashion business.

The surrounding urban context bearing peculiar features, the plan originated from the clients’ precise request for a living space that showed a clear-cut difference between the two main aspects of the owners’ lives: the private dimension and communal life, involving the circle of friends and acquaintances. Such a need could quite satisfactorily  be met by the existing premises. In the living area, a 25 x 7m one-space room, into a white aciustically insulated and regular screen, which restored the long wall (made from stone and  brickwork, with an irregular surface) and the ceiling  (made from depressed concrete beams) to their original condition. Very few elements appear in it: the separated kitchen block, two service cupboards, a table, some chairs and a sofa. Fragments of life, ideally bound together by a 25m long aluminium rail set under artificial light that holds over 5,000 long-playing records belonging to the clients’ collection: indeed, music is the only actual protagonist in the whole room-space, alongside with images projected on the background wall. Emotion and memories, and virtually no physical form or substance, model architectural choices that look suspended and severe. A very thick white¬-painted wall, obtained by imposing  a regular pattern of alternating full and empty spaces on an old outside wall, divides the living from the bedroom area, the latter being concealed behind three wide dark glass walls. As against the living area, plain and nearly empty, private rooms are moulded by intersecting portions of parallel masonry walls and perpendicular opaque glass sheets, thought of as natural light walls. In the centre of this area there is a mezzanine, around which space is left free to stretch to its full height, originally of over four metres. All the service rooms are hidden, and so are the lights, the electrical appliances, as well as the furniture and every object around which the life of the entire household takes place: they can only be reached on purpose by moving along a network of paths that just reveals the platform like bed and the basin-shaped bathtub, the emblems of  more private life. Natural light is the leitmotif  in every single space, coming in through rooflights and large sliding doors and windows opening onto the patio and the upper terrace. The organization of outer spaces is as important as the inner one. The flat roof can be accessed from the terrace and becomes a further extension of the house itself. It is screened on two sides by bamboo walls; on the third side a continuous platform hosts a garden with aromatic plants, while the fourth side leads beyond a long wooden bench to the neighbouring garden, in which there grow plain grass and sengreen, any other barrier between the two estates being removed.